ghostpinballer
Post rating: +
i know i am in a minority on here wrt the ypg but if assad does check this forum out, please do a deal with them and help them fuck up the turkish army and the jihadi failsons the turks work with mr assad, please, for christmas mr assad.
JohnBeige

JohnBeige
Black Belt
Post rating: +
They had a working military relationship somewhat recently, but I havent really been keeping up with the situation
ghostpinballer

They had a working military relationship somewhat recently, but I havent really been keeping up with the situation

saa and ypg have fought alongside each other before, i've read there's quite a lot of (cautious) mutual respect there. idk why they didn't pursue the negotiations earlier this year, yeah the government's terms were harsh but that's negotiation isn't it, give them a counter-offer ffs. it seemed like the YPG knew, at one point, not to trust the US, but this year has shown how badly they've miscalculated.

"After the US decision to withdraw. SDF leadership and the Syrian government are holding a high-level meeting to discuss the handover of the oil fields in the east of the Euphrates"

hmmmmmmmmm.......syrian government are surely gonna want a lot more in this round of talks...and this is from the SOHR so it's probably bullshit

MarxUltor
Post rating: ~
the ypg are pretty useless and Afrin proved that beyond a shadow of a doubt if anyone ever had any after their "brilliant" ""victory"" in Raqqa
ghostpinballer


like i said, i'm in a minority on here and i'm well aware most of their muscle came from american firepower. w/r/t afrin, once that firepower was withdrawn i'm not sure any outfit would stand much chance with AKs and RPGs against a well-equipped enemy working in tandem with jihadis and the remnants of ISIS.

elias
Post rating: +
ya id hope people on this forum would be less smug about the imminent genocide of the kurds
[account deactivated]
ilmdge

ilmdge
Online
Post rating: +
Yes they just have to basically unconditionally surrender to Damascus but now they don't really have a choice.

Ongoing negotiations between the Syrian Government and the Syrian Democratic Forces in Qamishlo. Information so far indicates that the oil fields will be handed over to the government and troops of the SAA will be transferred to the Syrian-Turkish borderhttps://t.co/49Hh6egCy8 pic.twitter.com/Jxo0xhhpIS


In all sincerity, I'm pretty sure this is actually their best hope to not be genocided since the whole mess of shit started. The Kurds were always 100% definitely unquestionably going to be sold by the US to Turkey. How many times have we betrayed them to everyone else in the region who isn't even a NATO member? The way this is happening at least gives them a chance to get over their own propaganda and surrender to Damascus just like every other raggedy militia in Syria has done in the past year when they were forced to wake up and realize america wasn't going to ride in and win the war just for them.

Trump's wholesale betrayal BEFORE the Turkish army crosses the border gives them the chance to join their peers from Douma, Ghouta, or Daraa in signing whatever reconciliation agreement the very nice man from Russia puts in front of them. They don't want to because they believe their own and the americans' bullshit about how special they ever were, and they thought that sitting on their ass pretending to fight ISIS for a few more months would buy them more heavy weapons and a US backed seat at an eventual bargaining table where they could hold the entire country's natural resources hostage. They very clearly had no fallback plan, and throughout the ordeal have generally demonstrated the strategic forward thinking abilities of a decorative koi.

Did anyone really maintain the illusion that the USA (let alone everyone with any legal say in the matter) would enthusiastically let them continue to suppress every other minority in the occupied territory and build a hostile ethnostate with all of Syria's stolen water, oil and olive fields right next to and over the objections of a NATO member who hates them? The only possible outcome was that the USA lets Erdogan go ham the day their use ended and bombs the shit out of any Resistance Axis member who crosses the Euphrates to help, if any were left to care at that point. Once the Saudis fucked up by being too stupid or lazy to stage a car accident or robbery or overdose like civilized spooks, handing Erdogan such a massive treasure of diplomatic leverage, the SDF's fate was obviously sealed and the message was given loud and clear by both Turkish and US authorities that the end was very imminent.

No one here wants the Kurdish people to be wiped out but the (formerly) US backed SDF/YPG project is a war crime, and if they end it, it goes a long way to ending the war, and letting the Syrians and Russians have a chance to prevent a genocide by occupying the border and slamming up a no-fly-zone backed by Russian S-400s and stealth fighters (all of them btw just itching to splatter some TuAF in case you forgot), and alleviate the real material suffering inflicted on millions of Syrians by the SDF's campaign of natural resource theft and american airstrikes.

cars
UNUSUALY COOL
Post rating: ~
I wonder if the Democrats will try to get Mattis to run in 2020 on an Assad-cursèd ticket
cars

cars
UNUSUALY COOL
Post rating: +
CNN's snitches in the White House are now telling them that Trump's about to make the same sort of announcement about Afghanistan and they're mad, they're balling up their fists and they're very angry at this man Trump.
cars

ghostpinballer
Post rating: ~
honest question, which minorities have they been suppressing? i remember the UN accused them of ethnic cleansing a while ago and then retracted when it came out they'd evacuated some villages, then helped the residents to return after a fight with ISIS. I've had a look around and can't find anything.
edit: i mean, I'm not about to die on this hill so if what you say is true then ofc it's bad. 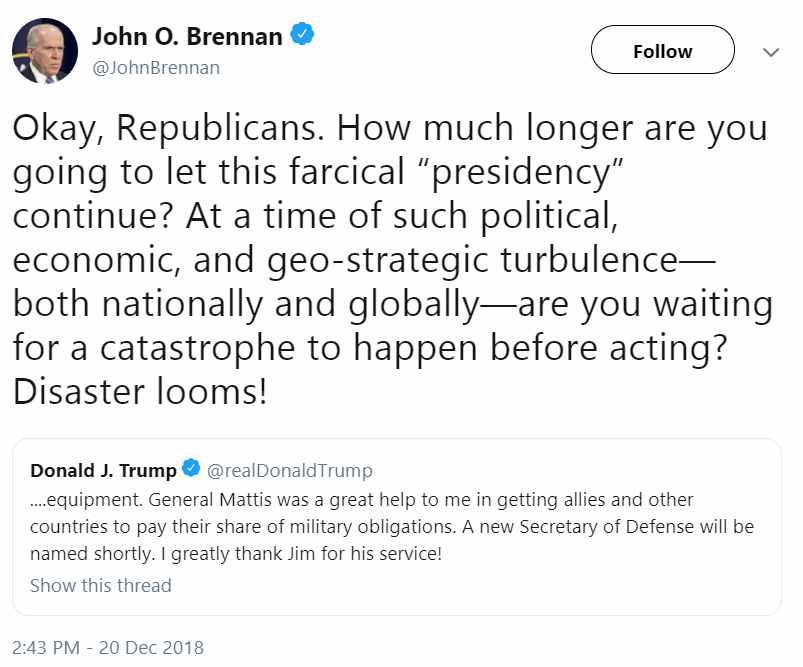 all I've found are two claims by amnesty and the UN that have since been retracted, a few shopped images on red kahina's twitter, and some hysterical horse shit from turkey and saudi affiliated sources with obvious agendas and zero evidence. people from minority groups who lived under the YPG seem to think quite highly of them. there was that whole helping the yazidis thing, too.
I'm not denying civilians have probably been killed during their engagements but this is a war, that's pretty much the norm.
tbf they did seem to have a strategy for dealing with an eventual american retreat but they clearly lost the plot, got over confident in their own position, and not accepting the syrian government's terms at the start of this year is the proof. not denying they've fucked themselves good and proper.
edit: just to be clear, imperialism is bad and i appreciate many of the points MarxUltra makes upthread. generally i don't talk about the YPG too much because quite often I'm not even entirely sure what my actual opinion of them is. it's vexing.

swampman
Dont Mess With Sucess
Post rating: +
I kind of enjoy the conceit that because the president said something, that's what's going to happen
MarxUltor

honest question, which minorities have they been suppressing? i remember the UN accused them of ethnic cleansing a while ago and then retracted when it came out they'd evacuated some villages, then helped the residents to return after a fight with ISIS. I've had a look around and can't find anything.
edit: i mean, I'm not about to die on this hill so if what you say is true then ofc it's bad.


I think that may have been more in Afrin actually, it was a while ago. And it wasnt ethnic cleansing or anything close to the scale the turks jihadi rabble did but still acting like settlers.

I kind of enjoy the conceit that because the president said something, that's what's going to happen

they'll stick around in some capacity. despite their whole regime change thing turning into a total failure, they still tried demanding oil from the syrian government earlier this year ffs. they got laughed out of the room. the yanks are shame piggies.

I kind of enjoy the conceit that because the president said something, that's what's going to happen

toyot
Post rating: +
be hilarious if trump's the one to roll back the empire. peace and unity in korea and peace in syria. it'd be like obama re-starting the housing market, by foreclosing on black and hispanic territory, and upselling land to wh....
cars

cars
UNUSUALY COOL
Post rating: +
it's going to be interesting if this is what prompts the intelligence/security agents of the U.S. to drop the farce & assume direct control of the government through public leadership of the Democrats, because if there's one thing we can take for granted, it's that the Trump administration neither will nor can stop those agencies from doing whatever they want in Syria, Afghanistan or anywhere else
cars

cars
UNUSUALY COOL
Post rating: +
Like... it's perfectly reasonable for Democrats to believe John Brennan, a blood-drenched criminal retiree pig with no official role in the U.S. government, knows more about what the U.S. government has done and is doing in Syria than New York real-estate diddler President Donald Trump, because he absolutely 100% does. And that could be a winning platform in a United States national election, "elect the guys who run the country already".
Flying_horse_in_saudi_arabia

especially his most popular moment, when it seemed to most people in the press that his re-election was guaranteed

be hilarious if trump's the one to roll back the empire. peace and unity in korea and peace in syria.


The “left case for trump”

especially his most popular moment, when it seemed to most people in the press that his re-election was guaranteed


i was referring to the fact that he was the big CIA man before parachuting into the white house but yeah, that too

i was referring to the fact that he was the big CIA man before parachuting into the white house but yeah, that too

cars
UNUSUALY COOL
Post rating: ~
what I'm saying is: when was the point the last straight-up CIA president was most beloved by the news press and why. Now compare it to this shit, right now, to where the CIA is at with the same set and why
ilmdge

Actions have consequences, and whether we’re in Syria or not, the people who want to harm us are there & at war. Isolationism is weakness. Empowering ISIS is dangerous. Playing into Russia & Iran’s hands is foolish. This President is putting our national security at grave risk.

cars
UNUSUALY COOL
Post rating: ~
the press in the U.S. has always preferred smug, obvious hints at murders planned or committed over the same sort of threats shrieked at the top of a man's lungs
Flying_horse_in_saudi_arabia

damoj
Post rating: +++++
i'm trying to imagine a 'roided Delta dude with deathshead tattoos on his balls shedding a tear while telling a Bookchin-reading YPJ 16 year-old he has to go to his home planet now

A sr military official told me US special forces troops distraught, upset, morally disturbed by having to tell their kurdish allies in Syria that, because of orders, their promises of defense won’t be kept.