drwhat
mt.real
Post rating: ~
i was always way more interested in what was going on with quark and garak than whatever the troops were up to, especially as the war shit ramped up. still waiting for the mmo where i can be a cool but fucked up merchant-operative in space
Vilerat 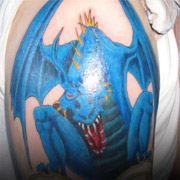 
Is the "cool" part negotiable?

cars
UNUSUALY COOL
Post rating: +
i read david gerrold’s book & there’s a whole part in it where he talks about how the ‘60s star trek series had the cumulative effect of promoting U.S. imperialism by setting up a bunch of rigged games where the heroes intervening produced improbably good results, which, yeah doy, but then he starts explaining that D.C. Fontana, imo probably the single most important writer in the franchise, quit as story editor after she wrote a script based on the U.S./DPRK Pueblo Incident, with kirk & crew getting caught on an illegal spy mission, and NBC read it and went apeshit on the show runners until they told her to completely rewrite it to make kirk look good in the end. her response was, going on vacation to Miami now bye. lol
cars 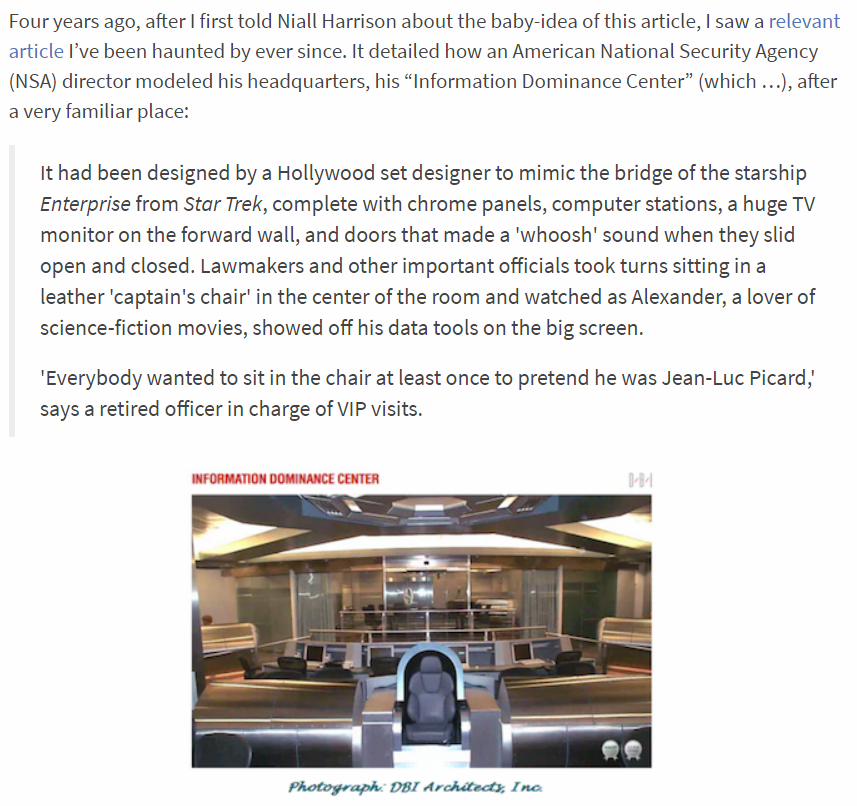 cars
UNUSUALY COOL
Post rating: ~
A Voth. The vastly advanced descendents of Earth dinosaurs seen in VOY: "Distant Origin". Although the Voth do have transwarp drive and hence would be able to bridge the vast distance to the Norcadian homeworld, they consider non-reptilian humanoids inferior and wouldn't really like to watch such a primitive fight. We could want to explain the presence of the Voth with him performing a cultural study, but we can see him cheer just likely everyone else does.
cars

cars
UNUSUALY COOL
Post rating: ~
The dilemma is that, taking the Star Trek Fact Files diagram as a reference, the saucer (without the bump on the top) would be only 6m tall at 120m overall length. Subtracting the required thickness for two times the outer hull and one deck floor, the clear height of the saucer couldn't be more than just enough for two decks of only 2.5m height. In addition, the cargo loading ports (or shuttlebay doors?) wouldn't be taller than only 2.3m (image) in this case. The bow port, BTW, is completely missing on the Fact Files diagram, and the lateral ports are much too small. The window arrangement would be really silly on a 120m Oberth, the lower row being just between the decks 1 and 2. We may assume that, for some reason, it was not possible to provide deck 2 with windows, and the windows, together with the ceiling, were moved up to act as "skylights". Maybe there are sensors and EPS conduits in the outer hull on this deck that didn't allow to install any windows. Anyway, since they can hardly be used for lighting, what would those skylights be useful for, except for providing the crew with the sight of the stars while lying in bed?
cars

cars
UNUSUALY COOL
Post rating: +
This is the place for my view on the issue and not a place for discussion. Still, I will try to anticipate a few objections. I am German. As opposed to apparently the vast majority of US citizens and in accordance with most of my fellow countrymen I'm not proud of my country. But I feel like defending us where we are being treated with unjustified contempt. Where is Germany in Star Trek? Aside from extremely rare casual references there has never been anyone or anything German on Star Trek. Well, with the striking exception of those three Nazi episodes (and an upcoming fourth one). So is it that we should feel honored to be featured more often than other nations that have no place in an all-American Trek universe? Germany has a recorded history more than four times as long as the USA, it has been the home to countless world-famous philosophers, authors, composers, inventors or physicists. Reducing all this to the twelve years of one barbarian regime completely misses the mark.
c_man

c_man
Post rating: ~
obrien shouldnt have been in the show and keiko should have been given his airtime. thats my ds9 opinion
cars 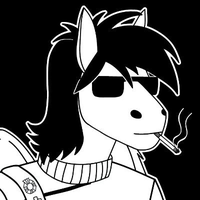 Horselord
take a shit on the floor
Post rating: ~
ive been playing star trek online. it's an mmo which means that it's a singleplayer game but occasionally you see other players doing shit in whatever map you're on. its a bad third person shooter with the ui of an asshole's version of simcity

winebaby
bb bourgeoisie
Post rating: ~
if you like space ships and politics perhaps you should check out eve online, you can test how your economic ideas actually function in practic e
sovnarkoman

sovnarkoman
Post rating: ~
yeah, you can even go for imperialism and then get killed by islamists
cars

eve online spaceship game is banned from this thread, forever.


his name was sean smith

cars
UNUSUALY COOL
Post rating: +
got my hands on the script leak from the new Star Trek show and it’s pretty much what you’d expect

ADMIRAL PICARD: [settles into space chair] It’s great to be back running the Enterprise. Now I can finally do the most important thing in the history of space: find Captain Benjamin Sisko.

MAJOR GARAK: I warn you, this is going to take a lot of homosexual tension and well-acted scenes between people who are not student council dorks from Starfleet.

CAPTAIN DATA: “Dork”. A variant of a 20th-century Earth term for male genitalia. I am uncertain

PICARD: [presses button on armrest and Data gets shot into space] You know what to do.

CAPTAIN GARAK: Ah, Commander Worf. Would you please be so kind as to set course for the Romulan Gun Factory.

Soviet_Salami
Post rating: ~
I was thinking about the TNG episode where they find a defenseless Borg abandoned on a remote planet. The crew of the Enterprise reacted either by converting him at phaserpoint to individualism, or plotting to use him as a suicide bomber against the Borg. In the end he converted and they gave him a new name, and he volunteered to return to his people and live as a secret individual, and Picard thought that armed with his new religion he could show the Borg the one true path and shake things up from within the great satan.


what ep is that

what ep is that

"bar association", the same one where rom reads the communist manifesto to his brother as a way of telling him he can go fuck himself

cars
UNUSUALY COOL
Post rating: ~
before Discovery comes back and tries to please a bunch of dumb people who will always hate it for existing i can't stress enough that i wasn't lying about its best scene to date, the guy has to win at gaming against the Klingons so he turns on his suppressed Klingon brain and yells what i guess is Owned in Klingon and they subtitle it as "Owned". this is shot and edited in subjective perspective as a scene of unspeakable horror & trauma, because the show is fine.
drwhat

update: i stopped watching around the 4th season.

update: i stopped watching around the 4th season.

i can't tell if that's made up or not

cars
UNUSUALY COOL
Post rating: ~
Actually you'll find I gathered a support base mid-posting-career that's remained steady and only complements my early upstart success. The secret is, I give the people what they want but I'm not afraid to get out ahead of the pack, make big plays and succeed on my own terms.
zhaoyao

zhaoyao
lies half the time
Post rating: +
i want lies about star trek and cars delivers. that is why i have upvoted cars over twenty thousand times
cars 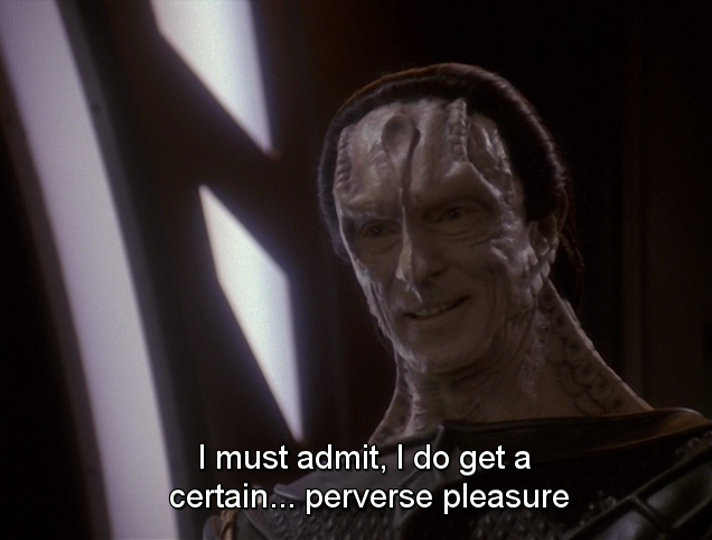 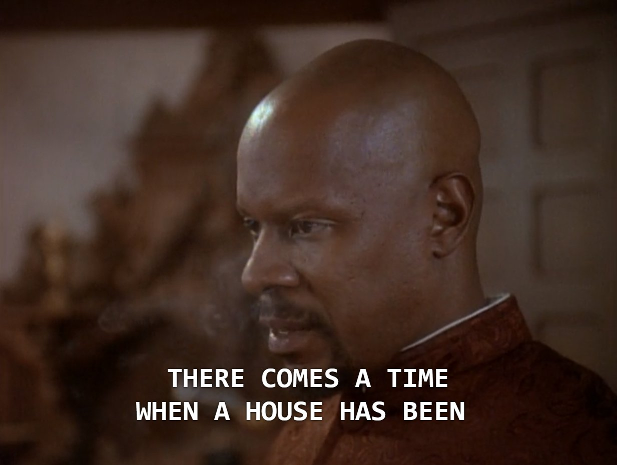 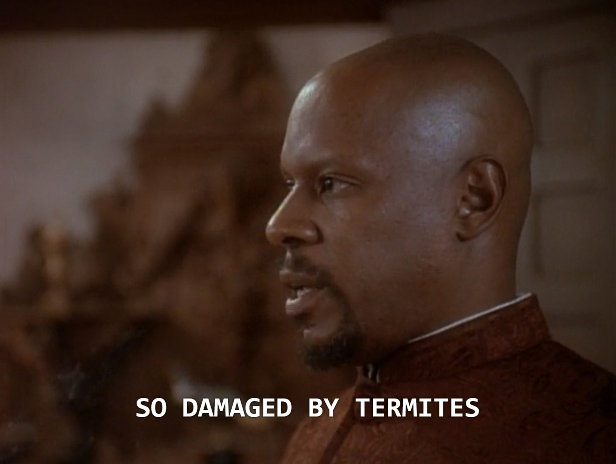 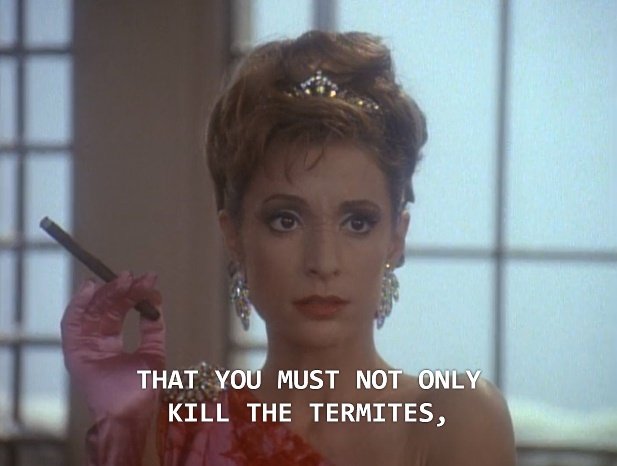 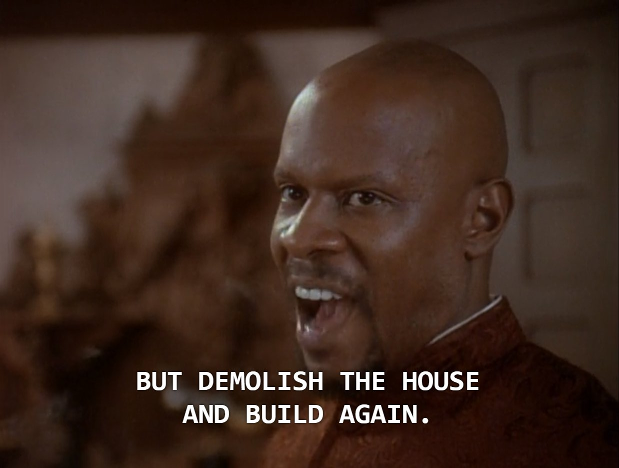 i never got past the first episode of enterprise, largely because of the preposterous scene where two people have a "debriefing" while "decontaminating" each other by rubbing lotion all over their naked bodies. i can only assume its the sexiest star trek ever

Enterprise is the least sexy Star Trek, it's because the show-runners decided Enterprise would be the sexiest Star Trek because they'd had Star Trek shows on the air for 14 years in a row and ratings for the entire franchise had been declining for like 10 years straight. it turns out exactly like when a nerd whose life is collapsing decides he's going to "cut loose" and start talking about how horny he is all the time. HOW EVER 3rd season Enterprise is them going back and trying to do the Voyager concept again and it's better enough that it's worth watching if you watch every episode with Jeffrey Combs in it from seasons 1-2 and then start watching from the last episode of the second season

Mainly it's about 9/11 for Star Trek, and it turns out Star Trek 9/11 is a little ball flying up to Earth and shooting a gigantic death ray directly into Florida, killing seven million people

cars
UNUSUALY COOL
Post rating: ~
I watched What Are Little Girls Made Of again. Gene Roddenberry rewrote the script 5 minutes before they started filming and it's about the character his girlfriend plays, so he has his girlfriend's voice come out of the mouth of Lurch from Addams Family and later a sexy robot woman implies she's been programmed to do it with her... Not Sure.
shriekingviolet