very skeptical that this is an example of the US "walking away" and not, you know, the yanks deploying a fellow NATO army to carry out an invasion and balkanization plan they themselves currently lack the political will and capital to do, but have been desperate to implement, and have tried to in a variety of ways including via the SDF, for more than 10 years. cars talk of how the CIA smuggled a coup attempt in broad daylight got me thinking about this.


also they really want them to buy jets
https://www.politico.com/news/2019/10/10/lindsey-graham-trump-hoax-call-043991
shoutout to the completely unsubstantiated "suspected links to russian intelligence" claim which cites... a guardian article with a completely unsubstantiated single line about "suspected links to russian intelligence"

they walked 30km away

oh sure but i mean the way it is being described is that even that 30km represents some kind of concession by trump rather than what seems to be the US merely subbing turkey who they wanna sell cool tech to and mend a few fences with, for the kurds who they have to fund and have some leftist ideology and alarming tendencies towards rapprochement with damascus

marimite
Post rating: ~
idgi, havn't people been saying for months now that YPG is going to making a deal with the Syrian government? what's preventing that from happening?
kinch

kinch
Post rating: +
there were talks in august but nothing came of them. presumably any deal with syria meant the end of the NATO partnership, and the YPG chose NATO. I don't know what the terms were then but now the SAA is offering assistance only if the SDF agrees to turn over their weapons and integrate with the SAA. purportedly there's a lot of infighting going on in the SDF between the kurdish leadership and the arabs that make up the bulk of it. the latter would rather make a deal.
kinch

kinch
Post rating: ~
anyway, glad that the turks continue the tradition of naming foreign operations after a 'spring' of some sort
zhaoyao

zhaoyao
lies half the time
Post rating: +
what are they calling this one, silent spring
sovnarkoman

We'll see if the Kurds and the Syrian state are able/allowed to make any progress toward a reunion.

i dont see that happening tbh

marlax78
Post rating: ~
And Esper is claiming the US is going to withdraw 1,000 troops. I hope both are true, but I'm skeptical.
sovnarkoman

what's turkey's goal here, other than to kill some kurds?

MarxUltor
Post rating: +
Trump tried backing a genocide and accidentally caused peace in the middle east. We sure do live in a timeline
dimashq

dimashq
Post rating: +
it almost seems like the whole NE Syrian proxy statelet was predicated on keeping Abu Kamal and all other land based routes into Syria closed and once that objective failed, the whole raison d’etre of the SDF utterly collapsed and the political cost of alienating Turkey was no longer worth it. I think this might be less a tactical retreat and more a strategic defeat of the US in the larger scheme of things and that if they are indeed pulling out then their whole strategic plan since at least Obama (destroy Syria, Iraq, and Lebanon in order to alienate Iran) just suffered its final defeat. I don’t even know what the US will do now, they’re losing everywhere in the ME and in a far worse position than in 2011.
dimashq

The #US now is trying to stop the deal between #SDF, #Russia and #Damascus to stop #Turkey. It seems that the US wants to transfer the SDF territories to Turkey and its jihadi militias. If true, #MMC and #SDF should fight against US invaders right now https://t.co/dNev365OaZ

dimashq
Post rating: +++++
It’s funny to see how the brains of the liberals who have some idea of the tangle that is NE Syria are short-circuiting right now because of the contradictory factors at play: on the one hand you have the liberals who cannot admit that the US empire has a distinction between strategic allies and proxies, especially in this situation where the underdog YPG represents all the values that America tells itself that it represents, as opposed to Turkey, the Islamist, “neo-ottoman” imperial power etc etc, a contradiction that only resolves predictably into the ol’ pee tape forced Trump to kowtow to Putin yet again, the “ideological Jew Russian” that has disturbed the American body politic. On the other hand are the liberals who see this necessary yet regrettable choice as having derived from Trump’s inability to actually do what he says he wants to do: “peace and an end to endless wars” by doing the exact opposite which is carpet bombing Damascus. NYT says this:

“If this president were serious about ending wars and winning peace, he’d actually articulate a strategy that would protect against a re-emergence of ISIS and provide for the safety of our Syrian partners,” Mr. Reed added. “But he has repeatedly failed to do that. Instead, this is another example of Donald Trump creating chaos, undermining U.S. interests, and benefitting Russia and the Assad regime.”

The #1 trait of ideology is that it’s always the truth flipped 180 degrees, they couldn’t directly admit ISIS actually was secondary to the more important goal of destroying Syria, and that combatting ISIS effectively can only mean defeating US interests and reuniting Syria. Therefore, Trump is reaping what he has sown by being forced into this position of choosing between Turkey and the SDF, i.e. they are saying that its regrettable that “we must turn NE Syria into a jihadi emirate by means of Turkish proxies, because Trump did not effectively turn the other parts of Syria into jihadi emirates”! Which is why we’re seeing this weird situation where the US is condemning both the Turkish invasion AND condemning the Syrian government’s intervention to protect Syrian territory from the Turkish invasion they just condemned! 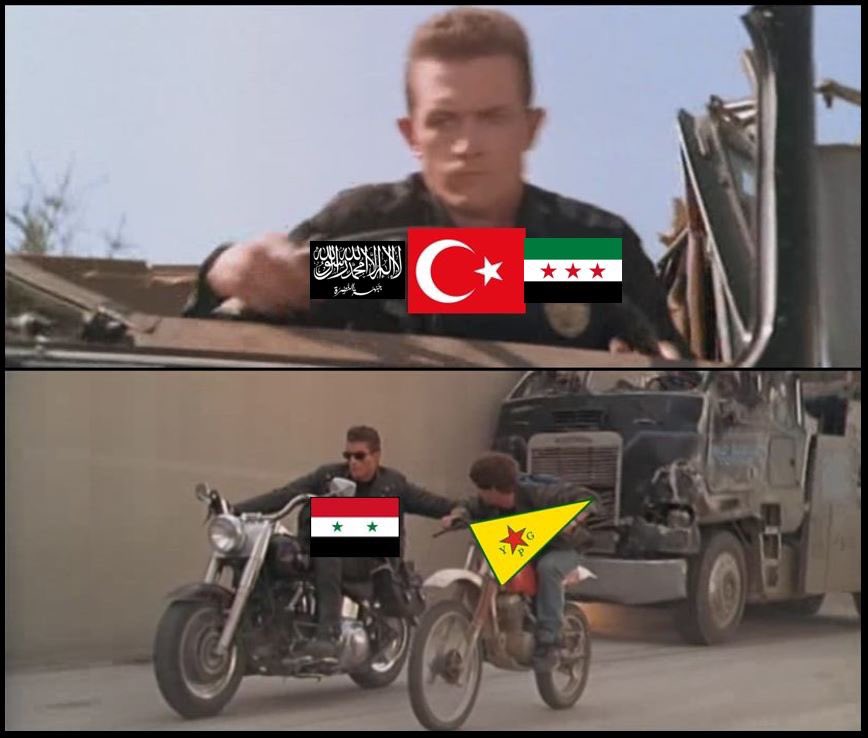 Horselord
take a shit on the floor
Post rating: +
its genuinely extremely enjoyable seeing the white house go from "fuck it let turkey invade" to "turkey don't you fucking dare" in like 36 hours time and all it took to make it happen was the ypg asking for help from literally the only willing people in the region. surely they expected this?
thirdplace

thirdplace
Post rating: ~
imo the defense and intelligence establishments never wanted this but were unable to talk trump out of it, but where their direct influence within the white house failed, their indirect influence as laundered through conservative media succeeded
RTC

3/ "SDF agreed to the entry of the Syrian Arab Army (SAA) and the SAA control will extend over the entire region, starting from Ayn Diwar in the east until Jarablus in the west."@akhbar pic.twitter.com/NQxXna7j2g


5/ "Second axis from Manbij into the direction of Ayn al Arab on Syrian Turkish border until Tell Abyad and towards the west." (the agreement mentions only the Arab name of Ayn al Arab, which is called in Kurdish: Kobani).@akhbar pic.twitter.com/ta51miVcRv


8/ "By that, the SAA will be present in the entire region east and north of the Euphrates and in coordination with local military councils, while area between Ras al Ayn and Tell Abyad stays as an unstable combat zone until it is liberated."@akhbar pic.twitter.com/C7vKppGO4l

They will stand by the SAA in confronting Turkish threats to Syrian land under leadership of Mr. president Bashar al-Assad."@akhbar

dimashq
Post rating: +++++
On to Idlib and then Golan Heights inshallah
ghostpinballer

“About 500,000 human beings were killed in Syria while Barack Obama was president & leading for a “political settlement” to that civil war. Media has been more outraged in the last 72 hours over our Syria policy than they were at any point during 7 years of slaughter.” BuckSexton

Russian guy posing with US molon labe flag at abandoned American base in Syria pic.twitter.com/NcJ4IiEBFo

sovnarkoman
Post rating: ~
lmao the commander in chief of SDF went to the US and whined about how russia is supporting turkey and helping them defend their interests

edit: sorry he went on some arabic television to whine, he sent his deputy to DC instead who is whining about similar shit apparently

kinch
Post rating: ~
hopefully this gets resolved in sochi on tuesday
cars

SDF official: We have withdrawn 32 kilometers from the Turkish border https://t.co/1NeY7fXASP via @SkyNewsArabia_B #Syria pic.twitter.com/YIIvrQ2aFw

so is syria just going to let turkey keep a part of it?

I really enjoyed my conversation with General @MazloumAbdi. He appreciates what we have done, and I appreciate what the Kurds have done. Perhaps it is time for the Kurds to start heading to the Oil Region!

baghdadi dead, willing to put money on turkey having sheltered him for years now.

they killed him in idlib, that magical gumdrop land of 50000 hospitals and 1 million aid workers, where responsible groups like HTS protect the people and refuse to deal with anyone from ISIS

michael weiss is described as "inconsolable" and "losing fucking mind"

ghostpinballer
Post rating: +
as others have pointed out this is at least the 3rd time baghdadi has died since 2015 or so lol
Sunday

Sunday
Post rating: +
damn rip bro, see you on the flip side