This is an amazing illustration, using a Snapchat feature, of how much of a lie it is to call this a “war” or “conflict”. https://t.co/fyI7fFuG4D

i don’t think enough Americans understand how literal it is when Palestinians describe what is happening to them. settler colonialism is not being used metaphorically. having their homes stolen is not just what it feels like it’s what it is. https://t.co/dVla98MSHH 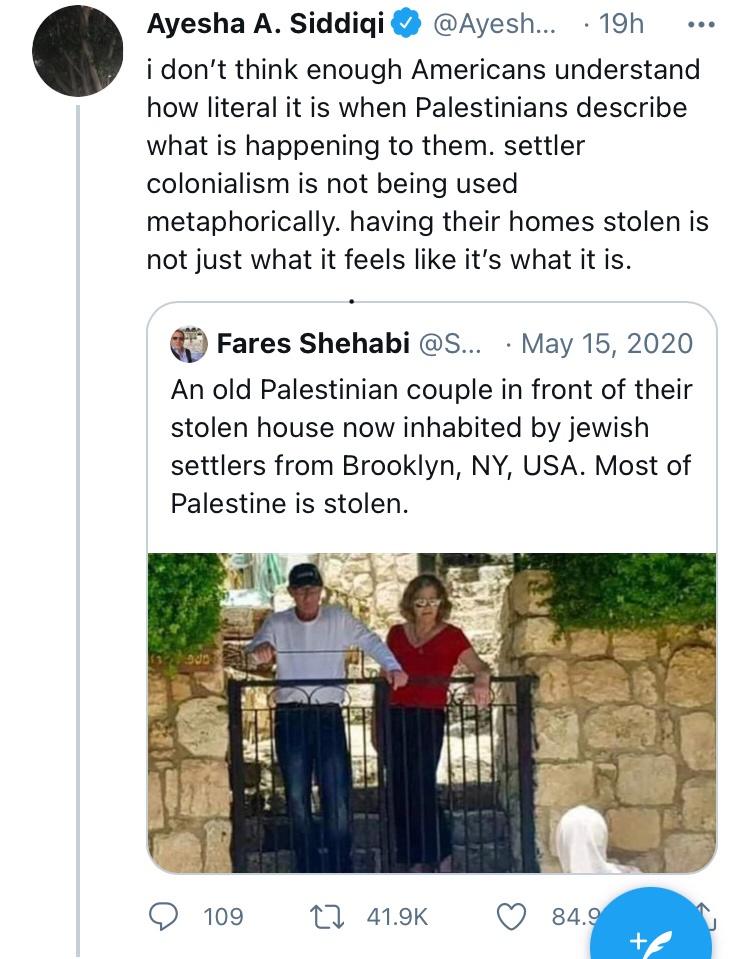 MarxUltor
Post rating: +++++
It isn't really a "mutual" ceasefire. The zionists unilaterally accepted the resistance's terms. They've been explicitly warned that if they try their usual antics of massive warcrimes right before the last second that shit is on again. Netanyahu surrendered. They were demonstrated utterly incapable of making it stop. In fact, as predicted, it was just getting worse for them as it went on. Iron dome was failing. Targeting was narrowing in on military bases.

The zionists have an army of cowards that couldn't be compelled to march 5 miles through a city of rubble, an airforce of billion dollar stealth fighters that spent a week and a half bombing said rubble around the clock with no observable military impact beyond killing kids, the ~third most feared/hyped intelligence service in the world which couldn't find 30,000 missiles in a prison colony, all led by generals who have never won a fight against a post-pubescent opponent armed with other than stones.

they lost to a bunch of dudes that celebrated when their weapons successfully damaged the ground.

This was an absolute humiliation.

Gonna be a hell of a lot harder to advertise for new settlers after this, and numbers of them have apparently already been going back where they belong.
cars 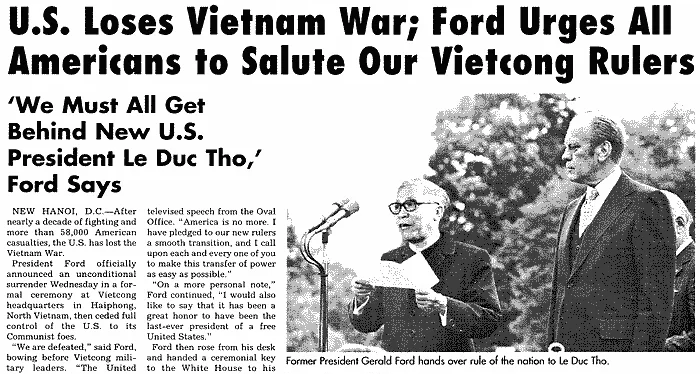 The zionists have an army of cowards that couldn't be compelled to march 5 miles through a city of rubble, an airforce of billion dollar stealth fighters that spent a week and a half bombing said rubble around the clock with no observable military impact beyond killing kids, the ~third most feared/hyped intelligence service in the world which couldn't find 30,000 missiles in a prison colony, all led by generals who have never won a fight against a post-pubescent opponent armed with other than stones.

dimashq
Post rating: ~
Highly recommend checking out Gaza and the West Bank on snapmap if you have Snapchat. It’s a massive party.
zhaoyao

zhaoyao
lies half the time
Post rating: ~
israeli troops once again raiding the noble sanctuary bc they were upset about celebrations going on there sorta undercuts bibi's victory narrative
shriekingviolet

jesus Joe those poor people have been through enough, have some mercy
sovnarkoman

in an interview w Israeli Channel (12) with pilots who participated in blowing up 9 residential towers in Gaza, inc one that housed media offices.


tpaine... ty for RTing this lol

this is in umm al fahm, a palestinian town occupied by the zionist state since 1949 https://t.co/zW0z3NU6Fc look at how these zionist forces treat the palestinian guy just standing there

cars
UNUSUALY COOL
Post rating: +
the body-armored thug doubling back, not to help the man up, but to remind his squad of the actual optics of a Jewish-ultranationalist stormtrooper shoving den Untermenschen off the sidewalk and into traffic
sovnarkoman

this motherfucking shitbag. this is what the El Kurd family has had to endure *in their literal home* for years now. this random racist from Long Island, NY, USA has been squatting in their home because he's Jewish. the outrage. do people not understand that he MOVED IN? https://t.co/NquSoMkJW0 pic.twitter.com/FqWNI6e1mU

tpaine... ty for RTing this lol 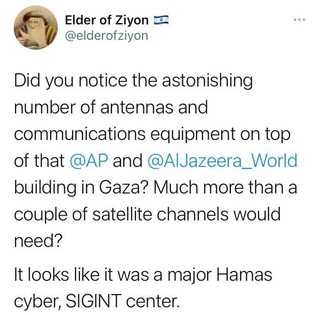 cars
UNUSUALY COOL
Post rating: +
“Inshallah, I am lucky enough to have about 2,600 cyber warriors in Cyberspace Operations that do just that,” Haniyeh shared.
shriekingviolet

shriekingviolet
Post rating: +
never in a million years would have guessed that the thing that finally manages to oust Netanyahu would be falling short of pandering to genocidal settler bloodthirst enough. absolutely incredible
sovnarkoman

BIG NEWS out of Israel could be coming. By next week Netanyahu may not be Prime Minister anymore!

On one hand, that's huge! On the other hand, he will be replaced by this guy.... pic.twitter.com/N1dvqs8CgZ

Bennett: “To my friends in the right-wing. They’re trying to frighten you this will be a left-wing government. It will be more right-wing than the current government. The left has appointed (me) a former CEO of the settlers council and a man of Eretz Yisrael as prime minister”

cars
UNUSUALY COOL
Post rating: +
as the Zionist entity’s propaganda fails more and more often in a given era of its rhetoric, its ideology demands that it become more and more open in its cruelty and deadliness. When it addresses those it recognizes as citizens, Tel Aviv presents any perceived doubt in its dishonest statements by the outside world as self-defensive justification for accelerating its murder of Palestinians. The persecution of the Jews throughout history is not only exploited in the most crass and vile way to advance an ideology of anti-Arab persecution and, ultimately, genocide. The degree to which that exploitation is crass, is brazen, is unbelievable but still believed, is taken as an inverse measure of how brutal the Zionist entity may & must become toward its occupied territories and their inhabitants. When belief declines, brutality increases.

"You stopped believing us; the believability of our fiction was all that was holding us back; you made us do this." It’s happened before and it’ll happen again

Israel's Netanyahu has been ousted out of office as opposition forms gov't; marking the end of the 12-year Netanyahu regime. pic.twitter.com/EiPPteGAlB

Assad inaugurates his new term with a new victim
cars

cars
UNUSUALY COOL
Post rating: +
CNN’s top story on Bennett becoming PM is headed with a photo of Netanyahu. It contains a bunch of photos of Netanyahu but only one photo of Bennett... with Netanyahu out of focus in the foreground. Weird shit
cars

lol okay There It Is i guess.

cars
UNUSUALY COOL
Post rating: +
they made balloons float at us, the balloons were on fire. launch the Ryan BQM-34E/F Firebee II death robots.
cars

cars
UNUSUALY COOL
Post rating: +
deploying my Incendiary Balloons against that Ross Perot ranch in Dallas. pushing the balloons over the fence with a big stick and the stick lights on fire and I'm mushing it in the grass so I can push more balloons until I'm attacked with 20-foot-long tungsten rods dropped from a satellite
zhaoyao

cars
UNUSUALY COOL
Post rating: +
Hamas taped a dog to a remote-control plane and it's going peepee on the settlers. it's wearing a little Red Baron scarf and goggles... disgusting