tears
Post rating: +
my congratulations to the US on their latest defeat
sovnarkoman

sovnarkoman
Post rating: +
the US just got tali-banned from afghanistan

tears
Post rating: +
we didnt pokemon go to afganistan for this
zhaoyao

War in Afghanistan (2001–present)
From Wikipedia, the free encyclopedia

A request that this article title be changed to War in Afghanistan (2001-2021) is under discussion. Please do not move this article until the discussion is closed.

Sunday
Post rating: ~
i think it is vital for the Taliban to cement their victory by marching on Washington DC
zhaoyao


the style manual explicitly prohibits being this honest, please revise

zhaoyao
lies half the time
Post rating: ~
rip president biden first political career casualty of the invasion of afghanistan. wonder how many supreme court justices trump will get to appoint during his second term
cars

interesting to see the "anonymous source"-dependent U.S. news media attack from the right on semi-withdrawal from Afghanistan, i.e., the attempt to replace Troops with privatized and "advisory" semi-troops. I guess what passes for journalists in the U.S. are already primed though by the cult of "the narrative"; "avoiding" the "Saigon narrative", etc., the idea of the "narrative" under the control of the interlocutors emerging as the last desperate hope they have to play-pretend at their own relevance, now that their "overseas bureaus" are all but destroyed and their sites, papers, etc., are mostly hollow sump pumps for DoD/CIA bilge. But it's still real funny to see sites like CNN desperately pushing stories that portray Biden as the greatest president in 50 years EXCEPT for pulling some soldiers out of Afghanistan, for which he is an unforgivable murderer of Our Brave Compradors.

was visiting family over the holiday, NPR was parroting all the military propaganda fall-of-Saigon-style stuff about Troops leaving that base in Afghanistan, mom was like "Who cares!! We should have left years ago, we should have left a DECADE ago" and shut the radio off. she remembers Nixon and the Vietnam War and is getting really fed up with the pro-Troop/Spook stuff from Liberal Media lately. i love my parents

...in case anyone tries to tell you the Troop-licking U.S. media is just so gosh darn angry about what happened after the withdrawal
cars

the White House better decide China did the virus if they don't want their 2024 h.h.i.c. candidate primaried. whichever one that is lol
cars

cars
UNUSUALY COOL
Post rating: +
wow. whoa; Interesting to see some of the. Weird situation where, 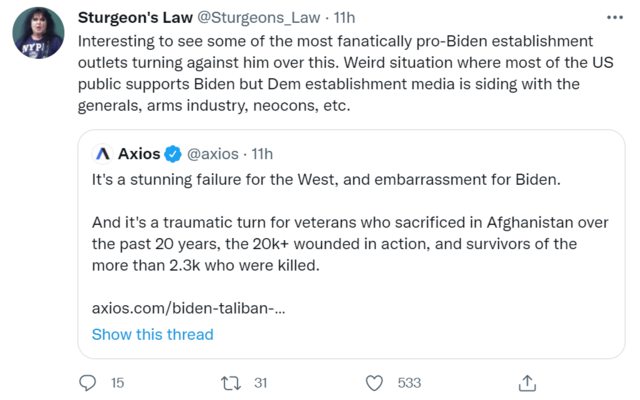 they've gone from being a couple years behind tHE r H i z z o n E to a little over a month behind us. getting closer 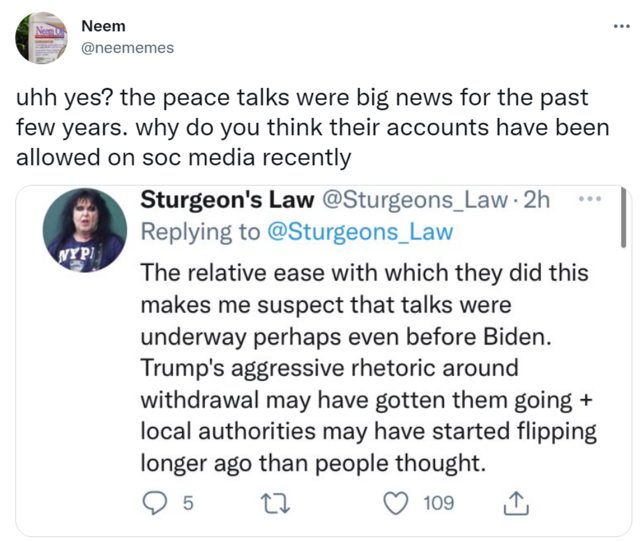 "I think that deal that was done in Doha was a rotten deal," the secretary said. "It told a Taliban that wasn't winning that they were winning, and it undermined the government of Afghanistan, and now we're in this position where the Taliban have clearly the momentum across the country."

Flying_horse_in_saudi_arabia
Post rating: +
*john oliver voice* the taliban weren't winning, and wouldn't be winning now if not for donald drumpf. 20 years of steady progress flushed down the toilet. did you know dtumpf has a gold toilet? a fucking gold toilet!!
cars

shriekingviolet
Post rating: +
it's been 20 years and they're still rolling out the exact same white man's burden spiel about how victory is only a couple months away, the propaganda strategies have evolved rapidly for everything else in the intervening period but when it comes to Afghanistan everyone's coughing and choking on this dusty ass mummified bullshit
shriekingviolet

shriekingviolet
Post rating: ~
I guess this is what happens when the war is so fucking old there are adults who weren't alive when it started, you can just play the oldies like they're new again
cars

cars
UNUSUALY COOL
Post rating: ~
how did that dickless old racist put it? Jest roll to your rifle and blow out your brains An' go to your Gawd like a soldier. nowadays they all want to do it in the comfort of their parents' garage
cars

Bipartisan Media Narrative currently is that it's China, and simultaneously, that the Uighur extremists, who aren't real and don't exist and are made up by China..... well, they will slide across the border with Taliban-governed Afghanistan and suddenly begin to exist and also transform into terrorists. So double super bad and maybe we will see the narrative soon that Just As Assad Secretly Helped ISIS, The Chinese Are Secretly Helping The Taliban Help Uighur Terrorists To Justify Beijing's Perilous Yellow Treachery. That tall tale didn't really work the first time and it'd be even more confusing this time, so I feel like it's good for at least one column in the New York Times or Washington Post or something like that.

It's like the virus lab-conspiracy hoax. Once Trump was gone and the turf war settled down, the CIA got out the riding crop and whipped the gimp back in line.....

shriekingviolet
Post rating: +
The Soviet Union cruelly forced America to arm the brave Mujahideen fighters as part of a 50 year masterplan to take away your freedoms
cars

cars
UNUSUALY COOL
Post rating: +
credit where credit is due to those who got it right

Lesson not lost on ambitious journalists: if you wanna get ahead in this rotten business, flatter Langley & Pentagon. And if a slovenly indy reporter rips you for being a hack, recall the ol American adage: "If you're so smart, why ain't you a full-time reporter with benefits?"

shriekingviolet
Post rating: +
I guess I have to self criticize here and retract my statement that there's absolutely nothing new in the prefabricated talking points for foreverwar dupes. Apparently the hot new thing to say when confronted with the brutal self perpetuating cycle of western interventionism is this: "the US didn't fund and create the Taliban because Mujahideen is a completely different word, QED. And anyways the 5 years it took for CIA directed warlords to become independent warlords is like, sooooooo long you guys. In conclusion if you really think about it those opposed to eternally bathing in the blood of children obliterated by drone bombs are the real racists"

so for those lurkers in the peanut gallery who might not be up on their propaganda vaccination shots and need reminding, let me just put up my favorite political image in all of history 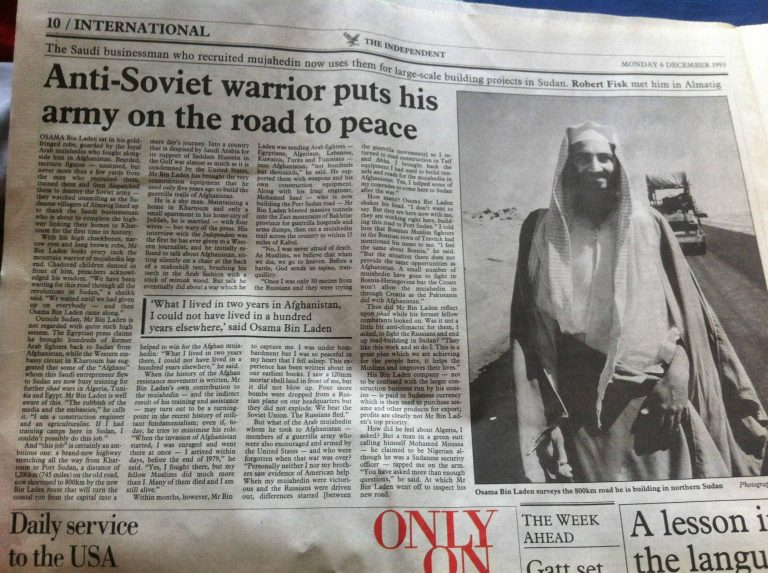 cars
UNUSUALY COOL
Post rating: +
weren’t they doing that back in 2001? i remember when the U.S-proxy Good Guys were called “the Northern Aliiance” and they were trying that line out, that this was Actually all a war between entirely different groups that teleported into the country in the last couple years and were completely unrelated to the Peshawar Seven, who had jumped into a wormhole at exactly the same time and disappeared from our dimension. Not only because it was pretty clear where the Bad Guys had gotten all their mojo from in the first place, but because the local Good Guys also had histories of like, crushing people with tank treads as a form of execution.
shriekingviolet

shriekingviolet
Post rating: +
fuck you're right. it really has been 20 years.
cars

cars
UNUSUALY COOL
Post rating: ~
yeah it has been a while… I Guess This Is Growing Up..

but yeah i think, like, if they’re pulling that now, “the mujahideen have nothing to do with Afghanistan a few years later because Saudi UFOs swapped out the entire population,” I feel it’s because it was hammered so hard into college-educated heads by revolving-door-seeking, eager-to-please, suddenly-important, Central-Asia-focused smooth-brained academics and faux “journalists” back then, in the early 2000s, that the sort of person who still describes themselves as a “policy wonk” in the 2020s is just tapping that old weak argument, in desperate defiance of the now commonly accepted facts of a U.S.-hostile Afghanistan as Cold War blowback.

And by now, there must be a whole younger gang of poli-sci, IR and related-discipline bachelor-degree types who were trained up on that nonsense, as the “Actually” card played by professor-style idiots against those poorly read enough to speak the boring truth in front of their NEOCON 101 class.
cars

cars
UNUSUALY COOL
Post rating: +
what possesses wimp nerds like corey robin to sit there on Twitter at this exact moment and be like, it’s So Important that no one opposed invading Afghanistan back when it happened. Bitch i did, i put on my black bloc lifestylist uniform and did your job for you while the cops enjoyed a free pass from everyone from the Bush White House to The Nation to break us down into parts that fit inside a cardboard box. Roll your boiled-egg-looking ass out of Ramona Flowers’ lunch sack and fight me bitchstick.
cars

cars
UNUSUALY COOL
Post rating: ~
You know who gets a pass on this one issue at least? Everyone who quietly and tacitly admits we were right all along and proceeds with firm purpose of amendment. You know who is forever a soggy-diaper baby? Everyone who starts whining about Nobody Coulda Known
Flying_horse_in_saudi_arabia

Flying_horse_in_saudi_arabia
Post rating: ~
all the polite clinton foundation neoliberal school of journalism types castigating biden's "failure" are not, i think on reflection, echoing a genuine sentiment of the imperialist war machine. they are on the one hand exploiting the chance to reinforce that old R2P chestnut, because even after libya and syria they are nowhere near done with that excuse. and on the other hand, all the wailing and gnashing of teeth about what will happen to the poor afghan women is drowning out any possibility of discussing what exactly this repositioning of imperial forces portends. sure, as we all know, the US is not really "out" of afghanistan and never will be, but withdrawing all the regular forces is not nothing. i don't think it augurs well in the context of all the sabre-rattling directed at china of late. not predicting all out war here, just saying the breathless reporting of the taliban's triumphant return to kabul is a helluva distraction.
solidar

I guess I have to self criticize here and retract my statement that there's absolutely nothing new in the prefabricated talking points for foreverwar dupes. Apparently the hot new thing to say when confronted with the brutal self perpetuating cycle of western interventionism is this: "the US didn't fund and create the Taliban because Mujahideen is a completely different word, QED. And anyways the 5 years it took for CIA directed warlords to become independent warlords is like, sooooooo long you guys. In conclusion if you really think about it those opposed to eternally bathing in the blood of children obliterated by drone bombs are the real racists"

The spin I’ve heard out of npr (for the bits I can bear to listen to between their homages to the US military’s brave defense of feminism in the country and their coverage of the inexplicable betrayal of the asserts left behind) the past couple days has been that this is all Pakistan’s ISI fault. Apparently the Mujahideen were brave honest freedom fighters that ISI turned into a murderous “terrorist group” and then when the US liberated Afghanistan the ISI hid (remember where OBL was found!!!) and rebuilt them in preparation for this very moment.

zhaoyao
lies half the time
Post rating: +
it's logistically inefficient to fly empty planes to kabul to evacuate people so all the inbound flights are full of troops