so today i started reading a novel about the maya genocide in guatemala that draws on a lot of non fiction texts and sources, and i came across a description of something called a 'development pole', described as a village of wooden huts with tin roofs surrounded by barbed wire and guard towers. these were apparently used by the military to 'concentrate' the population as part of counterinsurgency operations. i thought this sounded very similar to the vietnam strategic hamlets. i couldn't find very much on it online, but there is an article, written in a strangely neutral tone, from a back issue of a magazine called cultural survival. this gives a very detailed overview of how this program worked and how it tied in to the military's broader counterinsurgency/genocide campaign. one thing that struck me is this quote from a military official:

In a May 1987 interview, Col. Mario Enrique Morales, director of the army's S-5 (Civic Affairs) division, described this new strategy.

We now understand that we can gain more with civic action than with war. This represents a very profound change in the military mentality in the Guatemalan Army; and in this we are being original, we are not copying models...we have done all of this by ourselves, without foreign advice.


the program as implemented sounds so similar to the strategic hamlets that i wonder if it was explicitly proposed to the guatemalan military by the US, and perhaps this quote is some sort of attempt at pre-emptive damage control, to lessen the appearance of american involvement. i'm also curious about this magazine's background too. it was the official publication of an ngo of the same name, founded by an anthropologist and was ostensibly intended to advocate for indigenous rights, but the article is suspiciously neutral towards the literal concentration camps for indigenous people.. 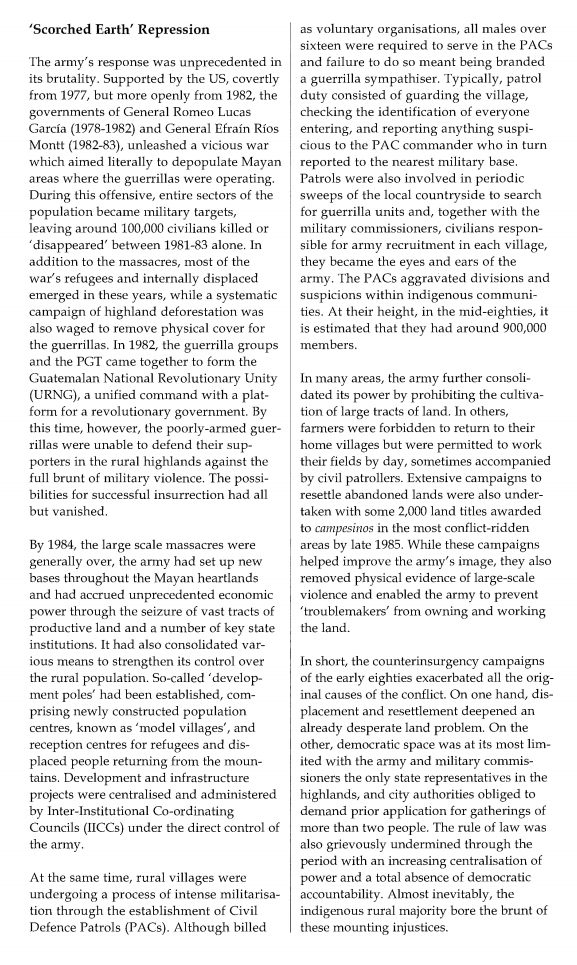