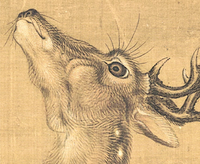 spacegaucho
Post rating: ~
As a new poster and glutton for punishment/forum beef histories I would like to plead the case for an eventual sweeping retelling of zzone history from the beginning til now.
zhaoyao

zhaoyao
lies half the time
Post rating: +
in the beginning there was a thousand plateaus & on each on of them was a big ol pile of shit
swampman

your request has been denied.

sweeping retelling of zzone history from the beginning til now.

your request has been denied.

Populares
Post rating: +
rhizzone is all about the present and future, and occasionally the past; but mostly twitch streams of speed runs of crisis in the Kremlin.
cars

There was once a great sage among us, Henry “Krinkle”, who keeps such knowledge still, guarded well by the tweetmen in his krinkled tower among the Twitter peaks... to we who remain it is lost. But I may be able to answer a question or two... (laughs) for a septim or two. (laughs, coughing)

rhizzone is all about the present and future, and occasionally the past; but mostly twitch streams of speed runs of crisis in the Kremlin.


i guess the cats out the bag now, yes we do have a secret speedrunning subforum and no, i cant give you access

somebody label the respective posters to tell the rhizzone story
trakfactri

trakfactri
Post rating: ~
me at the rhizzone discovering the lost tpaine posts

Sunday
Post rating: +
rebecca long bailey, who is seen as jeremy corbyns preferred successor as party leader, has started things off by talking about "progressive patriotism",
it will be interesting to see how this new sort of "national socialism!" pans out

pogfan1996
Post rating: +
My favorite rhizzone moment was when mark ames accused the site of being a Russian plant because someone brought up that Ames bragged about raping a 15 year old girl in Russia
ghostpinballer

ghostpinballer
Post rating: +
it took the corbyn left 2 weeks to pivot from his internationalist leanings to "actually *this* time we can make english nationalism work for us", fucking hell
sovnarkoman

Populares
Post rating: +
i'm not much of anything, but one thing i'm proud to not be is english.
kinch

kinch
Post rating: +
aunt got really into ancestry.com and won't stop emailing everyone about how we're not english
Flying_horse_in_saudi_arabia

aunt got really into ancestry.com and won't stop emailing everyone about how we're not english

can't really blame her, i'd want to spread the good news far and wide as well


Well you've just answered your question in the affirmative. Whether Corbyn would have been better in this regard than Johnson is purely hypothetical but I think the answer is a resounding "yes, maybe, a bit".

So let's not worry about hypotheticals, when has electing the more progressive imperial candidate led to sizeable benefits to the rest of the world?

The people of Venezuela, Libya, Syria, etc certainly didn’t benefit from the election of Obama.

actually, the leadership of venezuela have been quite clear on the fact things have been much worse under trump. after all, it was under a trump government that the core was able to cut off all CITGO revenue and ramp up sanctions as well as promote a fake president and stoke a contra army on their borders with colombia. cuba additionally had a massive source of foreign currency cut off when the trump government ramped up the blockade and slammed the doors shut on P2P visas. syria has permenant US military bases now after trump directly shot at syria with hundreds of tomahawk missiles. there's a general from fairfax rolling around libya as we speak. this is not in any way to absolve obama for his crimes against humanity, but it is to point out that there are both quantitative and qualitative differences between the obama and trump administrations (yes, even clinton and george w) that are hard to deny.


Returning to this conversation again,

Obama was a snake that spent billions toward destroying Syria, and personally oversaw the rape and murder of Col. Gaddafi and the destruction of Libya. He is not an ally. And yet: he oversaw a warming of relations with Cuba, and pushed a non-military agreement on Iran through an American landscape of beset with frothing Iran hawks.

This is in sharp contrast to Donald Trump, who tore up the Iran agreement and just eviscerated Gen. Suleimani with a drone bomb in an uninstigated act of war. He and his ilk squeal constantly about "Cuban spies" and he's reinstated Elliott Abrams in an attempt to destabilize and overthrow the governments of Nicaragua, Venezuela, even Cuba. There was just a US-backed military coup in Bolivia. There is a general campaign of maximum pressure against nearly all left or non-aligned governments under the Trump regime. Obama was no real friend to any of these countries of course, but Trump is certainly worse yet for independent movements in the global south and for socialism than Obama had been.

Then there is Bernie Sanders. He's a warmed over "radical" from the 60s, who previously called for the abolition of the CIA but now calls Hugo Chavez a "dead communist dictator." Completely unforgivable, yes, but still holds himself apart from the Democratic party and is more sympathetic to the left than had been Obama. And Jeremy Corbyn: a far better ally than Bernie Sanders on the subject of anti-imperialism. All these people are flawed and range from liberal to tepid social democrats. But, leaving domestic politics completely aside, I very much struggle to look at Trump's escalation of sanctions, warfare, and thuggery without thinking that his defeat (or Boris Johnson's defeat) by certain people (obviously not most) would be a noteworthy positive change for socialist movements in the global south, and for the world generally. I think this despite being Stalin-pilled for a decade and knowing that whoever is elected to lead the US/UK is primarily serving as caretaker for the disgusting imperialist capitalist hegemony and will always be compromised to a large extent if not killed (has anyone read this book I recently heard about, JFK and the Unspeakable?).

winebaby
bb bourgeoisie
Post rating: ~
I simultaneously believe that voting will never generate meaningful change and also that I should vote as much as possible, especially for leftist candidates. This is why my liberalism is terminal.
zhaoyao

zhaoyao
lies half the time
Post rating: +
this is the right thread for ireland posts & questions yeah?

why would anyone name they political party "finna fail"
Flying_horse_in_saudi_arabia

tears
Post rating: +
looks like the queen is going to have to kill off prince philip with covid to salvage this one
cars

wheatdevil
Post rating: +
They managed to switch out his heart by tricking a young, naïve Westminster page into exploring a damp cave in the nearby shadow of Balmoral Castle armed with naught but a pig-tallow candle and an unusually loose-fitting linen shirt
cars

The Dipendra Maneuver... all we need is an inside man...

33 years ago, the Queen’s husband spoke on the topic of reincarnation, and what he would come back as if such a thing existed.

He said: “In the event that I am reincarnated, I would like to return as a deadly virus, to contribute something to solving overpopulation.”